This article on How to Trade Pin Bars is the opinion of Optimus Futures. 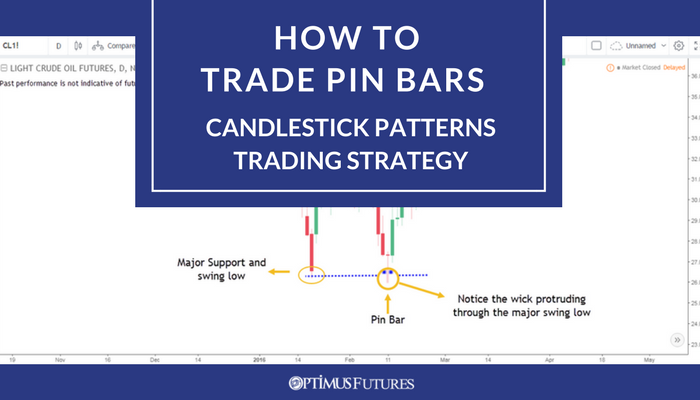 Trading specific candlestick patterns seems to be an intuitive exercise for most traders. Technical traders are particularly interested in using candlestick patterns as a trigger for their trades or a confirmation factor for either a trade opportunity or for general directional bias.

Within candlestick patterns, perhaps the most common and widely used pattern is the hammer or the pin bar, one of the most effective patterns to denote market turnarounds.

Why Pin Bars are Important

Pin bars are among the top choices for most technical traders that follow price action signals, but few do more than just take it as a fact. Understanding why they are important for order flow and market dynamics goes a long way in ensuring you use this effective pattern to its full effect.

We’ll start by looking at a bullish and a bearish pin bar:

The pin bar is effectively comprised of two segments, the “wick” portion and the “body” of the candlestick. Ideally, we want the body to be small relative to the size of the wick. The small body and the large wick play a big role in terms of why the pin bars can be effective.

In an uptrend you would normally expect candlesticks to comfortably close well higher than their open, possibly close to or at the high itself – that is leaving little to no wick on the upside. Such candlesticks are termed as generally bullish and indicate the continuation of the trend.

On the flip side, there is much to conclude from a candlestick that opens and shoots higher, only to close back down either below the open or close to it – creating the characteristic large wick and a small body of the pin bar.

For one, depending on where the pin bar is actually located on the chart, it could be an indication of price hitting a large block of opposing orders. Unlike a more ‘rounded’ action comprising of multiple candlesticks, a pin bar will often engrave the foundations of the reversal within the wick itself. That is because price essentially was able to initially head in the direction of the trend and then fall just as much within the candlestick period alone. At key locations (such as horizontal support and resistance levels) this information can be gold.

Imagine a pin bar wick protruding into a key resistance level. Now that you know a pin bar can underscore a major order flow tip over, can you guess which points on a chart would suit the pin bar pattern more than other locations?

We’ll answer that next.

Where to Look for Pin Bars

When you go back to your markets and charts to start hunting pin bars, you might straight away notice how frequently you may be seeing candlesticks that can be termed as pin bars – that is, having a small body and a relatively longer wick protruding on one side. In this section, we look at where to find them for maximum effectiveness.

As a rule of thumb, we are looking for bullish pin bars (pin bars with a large wick to the downside) at swing highs and key resistance levels. Bearish pin bars (with wicks protruding to the upside) are best found at swing lows and key support zones. Note that while we are looking for a small body on a pin bar, the color of the candlestick itself (close lower than open versus higher) usually does not make the pin bar bullish or bearish. Rather that conclusion derives from the direction that the wick protrudes in.

Here is a quick visual example of a pin bar piercing an important level thereby raising its importance. Notice that the bullish pin bar forms at key support here marked by the prior swing low. Also, notice how the wick actually pokes past the swing low itself. In another article, we explained in elaborate detail why price momentarily moving past key support and resistance levels and failing is often a key factor in determining market sentiment. It is better to have that phenomena merge in with the pin bars.

To further validate this point, refer to the same chart and you might notice a bearish pin bar pattern that actually failed. You may realize that the wick actually never pierced the resistance at the former swing high at all and formed under it.

It also helps to locate pin bars with wicks that protrude away from the candlesticks in the vicinity. It serves as a valid visual aid to ensure your pin bars are located at potential swing points rather than in sideways market action or periods of consolidation where their impact might be constrained by nearby support and resistance levels.

In the chart above we point to two bullish pin bars. Notice how Pin bar 1 actually forms at a minor pullback to the downtrend. That is, we had three candlesticks prior to it pulling back into the downtrend. As a result, we have a wick that is large enough but does not protrude far enough outside the vicinity of the most recent price action. Notice how it also fails to pierce the swing low a little farther away to the left.

Pin Bar 2 on the other hand forms at a swing low, and although smaller in size than Pin Bar 1, it’s still placed better and a has a wick that protrudes past the important swing low to the left. In hindsight, we can see that the first pin bar failed yet the second one did help reverse the bearish momentum.

As we talk about the importance of former support and resistance zones and swing points as key areas to be looking out for when locating higher probability pin bars, it is also worth noticing that the same key levels when falling in the pathway of the pin bar’s expected direction yield could severely hinder the pin bar’s effectiveness.

Take the above chart for example. We have a strong looking bearish pin bar at a swing high. However, instead of forming at the key resistance level, it forms above it, such that price could potentially be expected to hold as support at the former resistance – which in hindsight, it does.

The market merely closed the gap and price reversed back above the 51.00 round number support and resistance zone marked in pale orange in the chart above.

When looking for pin bars at key levels in the market, it pays to foresee where the price would be headed if you do decide to trade (or otherwise follow) the pin bar as a valid setup. If there are key levels falling immediately in the way, it can sometimes stack the odds majorly against the direction you would expect the price to take in lieu of the pin bar formation.

How to Trade Pin Bars

Depending on the risk appetite, there are several ways people choose to trade pin bars with varying strategies for entry and exit (take profit and stop loss).

Stop-Loss Disclaimer: The placement of contingent orders by you or broker, or trading advisor, such as a “stop-loss” or “stop-limit” order, will not necessarily limit your losses to the intended amounts, since market conditions may make it impossible to execute such orders.

Aggressive futures trading approaches call for trading the pin bar at the close and sometimes at a retracement into the pin bar to attain a better price point for the trade. These strategies assume the pin bar and the setup overall is strong enough to expect a quick and sustained move in the direction of the pin bar, as in the case with a large pin bar protruding into an extremely important long-term support and resistance zone.

A more conservative approach calls for taking the trade at the ‘break’ of the pin bar. For this strategy, conservative traders like to place a stop/limit order a few ticks above the bullish pin bar and below the bearish pin bar as a cushion against the likelihood of price never taking off in the anticipated direction at all.

Consider one of the failing pin bars we discussed above.

We identified Pin Bar 1 as a failure because the price was essentially able to move in the opposite direction past the pin bar’s low. Notice, however, that it also never broke the high of the pin bar either. While an aggressive trade might have taken a loss on this one, a conservative trader would have been safe as a potential stop order a few ticks above the high of the pin bar would have never really triggered at all.

As far as stops go for pin bars, traders usually prefer to stack it just beyond the wick of the pin bar, so as to book a loss when the pin bar technically ‘fails’. Again, more aggressive traders will sometimes place the stop tighter, perhaps just above a round number or a key level in the market that the pin bar’s wick protrudes far into. Other times a tighter stop could result from the anticipation for a quick sharp break of the pin bar due to the strength of the setup itself.

More conservative stop placements can sometimes call for stops being farther away from the pin bar’s wick, perhaps beyond a round number or in a more choppy market where the wick’s length may not be sufficient enough to safeguard against a sharp price movement, that may otherwise not be threatening to the setup itself.

Regardless of what style you adapt to follow and trade pin bars, they are a must in every technical trader’s arsenal. When it comes to candlestick patterns and their credibility, pin bars arguably take the lead amidst all others.