Pre-Trade Checklist | How to Use Scoresheets to Prepare for Your Trades
Optimus Futures.com
Menu Open Account 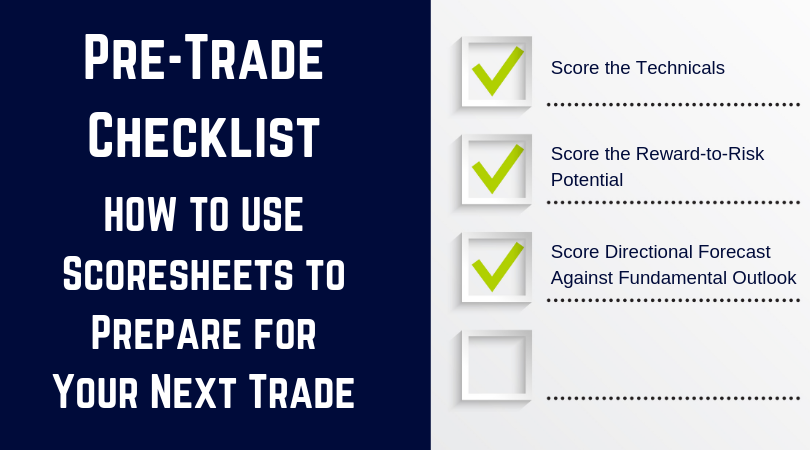 When given the choice between trading objectively and trading solely “from the gut,” chances are that an objective approach might suit you better. Elite traders (as we covered in a previous article) may be able to combine both, trading intuitively or, as the cliché goes, “in the zone.” But rarely would they rely solely on one or the other, as intuitive decision-making often relies on both capacities combined–that is, being able to harmoniously fuse objective and subjective approaches.

One simple but effective way to make objective decisions while trading is to keep a pre-trade checklist with scoresheet in hand. It isn’t rocket science, but the simplicity of the approach often conceals the much larger benefits that such a trading scoresheet can provide.

Main Benefits of using a  Pre-Trade Checklist with Scoresheets

A trading scoresheet can help you with at least three crucial goals, further expanding your capacity to trade in a more flexible and opportunity-rich market environment:

1) It can help prevent you from over-trading:

You can decide which trades “deserve” to be executed and which ones to skip.

2) It can help you optimize your position-sizing approach:

Evaluating the trade risks can help you determine the number of Futures contracts to run on each trade. You can move from fixed-position trading to a variable R% trading approach that will not only help you minimize risk but can also help you maximize profit potential.

3)  It can help increase your range of markets:

Armed with a scoring method, you can evaluate several markets to see which ones might provide a more favorable reward-to-risk scenario. giving you better and (hopefully) higher-probability trading opportunities.

So, how might you get started? Here is one simple method to begin scoring trading opportunities before you pull the trigger. Bear in mind that our examples use three parameters to score potential trades. You don’t have to limit yourself to just these three. Each trader is different, so be sure to customize the parameters so as to better align them with your own approach.

How to Set Up A Pre-Trade Checklist / Trading Scoresheet

Use this score to qualitatively assess technical aspects such as support and resistance, chart patterns, indicator/oscillator readings, etc. There are a few sites (and books) that rank technicals based on past performance. Although the probabilities change over time, such an index might be useful when considering the historical outcome of certain trades. Otherwise, you can base the score on your own knowledge and experience.

This is a tricky score because it depends on how much you are willing to risk versus how much you expect to gain in an optimal reward-to-risk scenario.

Have you ever made the mistake of going long a commodity during a period of booming supply and receding demand? If you were aware of these conditions and decided to take a contrarian position, or a smaller counter-position within a larger trend, then perhaps you can be excused if you ended up with a loss. But if you weren’t aware of the supply and demand conditions, only learning about it after the fact, didn’t you feel kind of foolish?

Remember that fundamentals drive the longer-term trend, so it might behoove you to pay attention to the economic factors affecting the markets that you trade. This too, you can rate on a scale from 1 to 10, depending on how aligned your trading thesis is with the overarching fundamental conditions of the market.

Whichever way you decide to implement this, make sure the scoresheet works as a quick checklist to emphasize the qualities that you would want to see in an optimal trade setup. By using a scoresheet, you can transition your approach from a potentially haphazard way of trading to a more cold and calculated way of exploiting the markets.