Dow Theory is a cornerstone of price analysis and its principles have been time-tested over decades. An understanding of the three market phases and the trend cycle concepts within the Dow Theory can help traders make sense of the way price moves and shed new light on how bull and bear markets are created.

The Dow theory distinguishes between the accumulation phase, which is where the ‘smart money’ starts to accumulate positions very early on, and the public participation phase where the trend has become apparent to the ‘typical investor’ and retail traders. The third distribution phase is the final stage where the market tops and the smart money is unwinding their positions while the average investor is usually still adding to their positions. Let’s now take a closer look at the individual trend phases and what is important to know here. 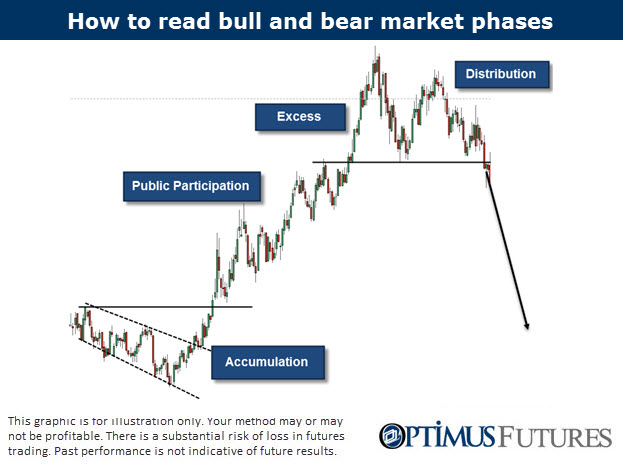 During the late stages of a bear market, a trader should look for extended periods of consolidations, a shift of how swing highs and lows manifest on the charts – which is another key point of the Dow Theory. Technical plays and patterns during an accumulation phase can also be divergences on momentum indicators, broken consolidation channels that indicate breakouts, (inverse) head and shoulders patterns and other transition modes.

Once price exits the accumulation phase and the new trend is starting to become visible, then the public participation phase begins. More and more investors join the trend and drive prices higher. Usually, the public involvement phase is accompanied by real economic data. The longer the trend lasts, the more investors will enter such a market, and this is also the stage where so-called ‘trend-following’ or ‘momentum’ traders will get signals from their trading methods to enter.

The public participation phase is the longest of the three market phases and at the end of it, you will often see an excess phase where the trend accelerates even further. During the surplus period, euphoria and irrational optimism often enter the market, leading to a bubble-like behavior. The last of the uninformed buyers enter the market at such a phase unknowing that the end could be near.

During the excess phase, the ‘smart money’ starts to unwind their positions because such markets are fragile and things can become hectic and extremely volatile. A trader should always be aware of the warning signals of this phase, such as significant downward pressure, increasing volatility, deeper pullbacks and when upwards trend waves lose their power.

The distribution phase is then the origin and the initial phase of a bear market – opposite to the accumulation phase. Whereas the informed investors unwound their long positions during the excess phase, they will now enter new short positions during the distribution phase. At this stage, the market tends to be overbought, although the uninformed traders still believe that more bullishness is on its way. At the same time, without a good understanding of market phases, a trader has to be aware that he is not just picking a top during a bull market – mistaking a shallow consolidation during a bull market for a distribution phase can be an expensive mistake.

Again, the trader should look for special signs such as prolonged concentrations, flattening buying attempts, head and shoulders patterns, new breakouts out of long ranges and signs that price is making lower lows and lower highs. This is the cornerstone of Dow Theory.