Today we want to address a trading mistake we see way too often – the “wrong” choice for the amount of contracts, which can lead to a number of trading problems. Most traders are not even aware that what they are doing is influencing their trading performance in a negative way.

After reading this article, you will see how the contract size influences your trading decisions in ways you haven’t considered before.

Why trading with 3 contracts is easier than using just one

Before we get started, we need to make a point. It is not so much about the exact amount of 3 contracts, but the general idea behind trading with multiple contracts vs. just 1*. Many retail traders, especially when starting out, are scared of losing money and then just buy or sell 1 contract to enter a position without knowing about the implications.

Although those traders believe that their choice is the right one because they want to limit their risk, it makes trading much harder for them. Trading positions with only 1 contract does not leave you with any flexibility and once in a trade, your options are reduced to an absolute minimum.

Think of a chess game where one player can only move each piece one field at a time, while his opponent is allowed to move the chess pieces normally. Of course, the player with limited mobility is going to lose. Traders often impose restrictions on themselves without even knowing it. 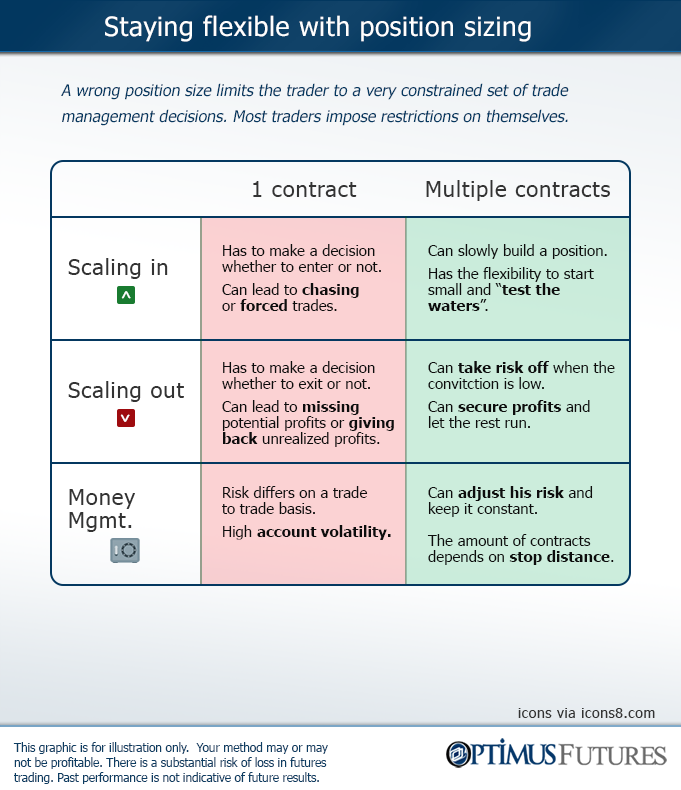 Scaling in – Building a position and testing the waters

Let’s say your maximum risk on a given trade is 3 contracts, but the setup does not look too convincing right now and you see an immediate resistance level that could stop your trade. The smart trader would open his first position by only buying one contract and after price has broken through the level, he will buy 2 more to build his position. That way, he can open the position on the initial level but only scale into his full position after the obstacle is out of the way.

The trader with only 1 contract has to decide whether he enters before OR after the resistance level. Of course, he can avoid a loss if price does not make it past the level by waiting first, but he will also reduce his profit potential on his winning trades if he decides to enter too early. The trader is facing dilemma and it seems that regardless of his decision, he will never be completely content.

A word of caution: averaging down has to be avoided and scaling in should not be mistaken for an excuse to add to a losing trade.

The method of scaling out of a position is applicable in different trading scenarios and we will discuss both to show the advantages of being flexible.

First, a trader can scale out of a losing position. Traders who only trade one contract have to decide whether to completely exit a trade or let it hit the stop loss order. The trader who has bought multiple contracts can sell some of his position on the way down. Thus, if he is not fully convinced of his trade idea anymore, he can reduce his risk but he does not have to completely abandon his trade idea. Exiting a trade and then seeing it reverse to your initial take profit can lead to revenge-trading and frustration; the trader who remains flexible, does not have this problem.

On the other hand, a trader can scale out of a winning trade. Often, scaling out of a trade and realizing some profits can take off a lot of pressure and it can be better than trailing your stop loss and getting taken out during a retracement. Again, the trader with only 1 contract has to make a decision to exit completely and give up on potential profits or let it run and maybe risk giving back all of his profits. Such a decision can be hard and nerve-wracking and, thus, lead to emotional trading mistakes.

The trader with only 1 contract also completely neglects money management and position sizing.  The amount of contracts you buy has to be based on the volatility of the market and the stop loss distance. Whereas one trade might have a stop distance of 5 points, another one can have a stop distance of 15 points. The trader who only trades with 1 contract has three times the risk on the trade with the 15 point stop.

Trading can be a difficult business, but most traders make it even harder than it has to be. Do not limit yourself right from the start by making wrong assumptions and decisions about money management and position sizing. You might think that the amount of contracts is not that meaningful, but it impacts your whole trading approach and it can lead to emotional trading mistakes that cost traders so much money.

*of course, if your account size and risk appetite doesn’t allow using bigger sizes, we do not encourage you to take additional risk.

There is a substantial risk of loss in futures trading. Past performance is not indicative of future results. You should therefore carefully consider whether such trading is suitable for you in light of your financial condition. The placement of contingent orders by you or broker, or trading advisor, such as a “stop-loss” or “stop-limit” order, will not necessarily limit your losses to the intended amounts, since market conditions may make it impossible to execute such orders