The following article on How to Trade with Support and Resistance Levels is the opinion of Optimus Futures. 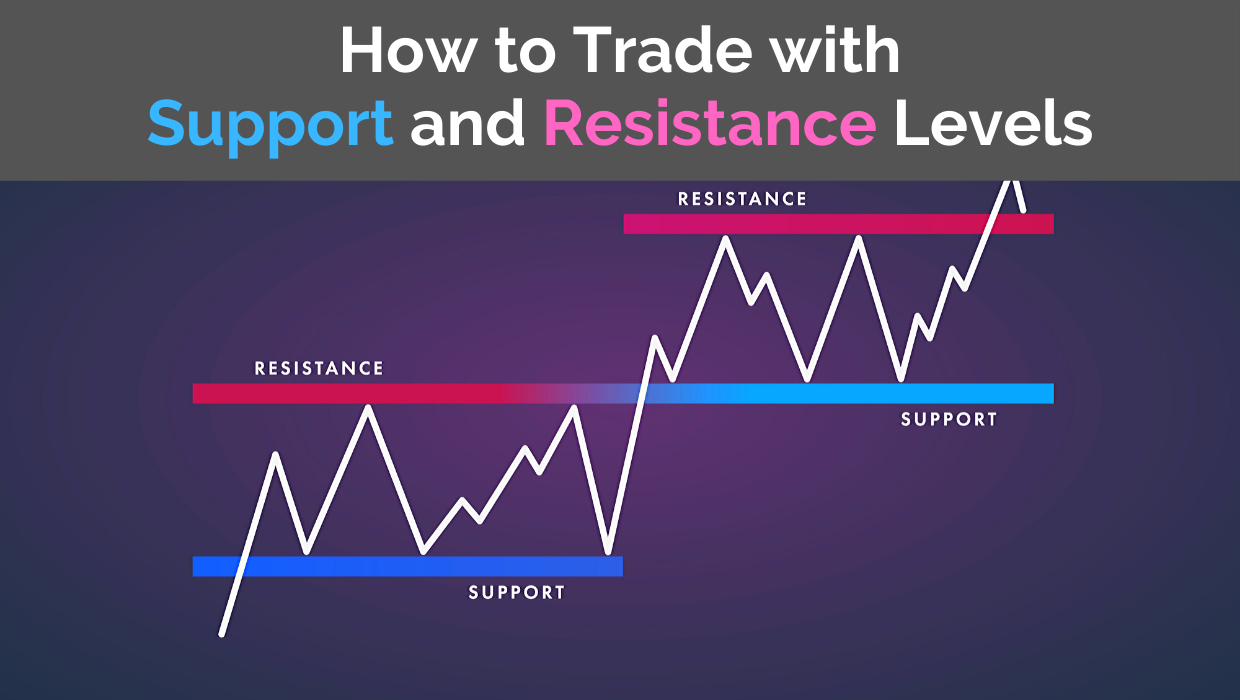 Support and Resistance levels are concepts that are so fundamental to technical analysis that any lack of understanding in their formations and indications may serve a major impediment to any trader’s technical progress. This article has two general goals: first, it aims to cover the basic concepts surrounding support and resistance; and second, it aims to provide a few tips on how to use support and resistance levels in your trading.

What Are Support and Resistance Levels?

Support and resistance points at which price trends reach a temporary limit, either to reverse or continue in the direction of the original trend. Why do prices reach this limit? Because demand has increased above supply (support), or supply has increased over demand (resistance).

As the demand for a futures contract increases, bulls take over, bidding prices upward.

When supply increases, the bears take center stage, their selling activity pushing prices down, as there are now fewer buyers willing to purchase a given futures contract at a higher price.

Support and resistance levels act like invisible barriers, preventing prices from moving past them. To get a more comprehensive understanding let’s discuss each level in detail, starting again with support.

Support is a level at which a downtrending price movement stops momentarily. Theoretically, support is where a large number of buyers enter the market, overwhelming the number of sellers. In short, demand overwhelms supply, bidding prices higher, causing a price decline to halt, or reverse and move higher.

Support levels are not impassible–in many cases, they can merely be temporary. An eventual break below support indicates a new level at which people are willing to sell. Often, once support has been broken, a new support level will be established at a lower price point.

Although there is no way to mathematically predict where the next support level may occur, historical support levels are likely candidates for future support levels (hence the saying that the market has a memory).

Resistance is the exact opposite of support. The resistance level is a point where selling is thought to be strong enough to prevent the price from moving any higher. The logic behind resistance is that more sellers have entered the market than buyers. Hence, the price of a futures contract is no longer bid upwards, but downward.

Imagine an auction where buyers are bidding for a limited number of products. Prices are moving higher as the limited supply tightens. Now imagine if a seller came in with a huge supply as the product is bid higher. At that point, buyers–realizing there’s more supply than demand–will have the sense to bid at lower prices, moving prices downward. The point at which price reversed–the level at which more supply entered the market–is what is referred to as resistance.

When the resistance barrier has been breached, a new resistance level will eventually be established at a higher level.

Futures can undergo periods of proportional trends, repeatedly hitting resistance and support lines until it is either broken or it causes price to move in the opposite direction.

How to Find Support and Resistance Levels 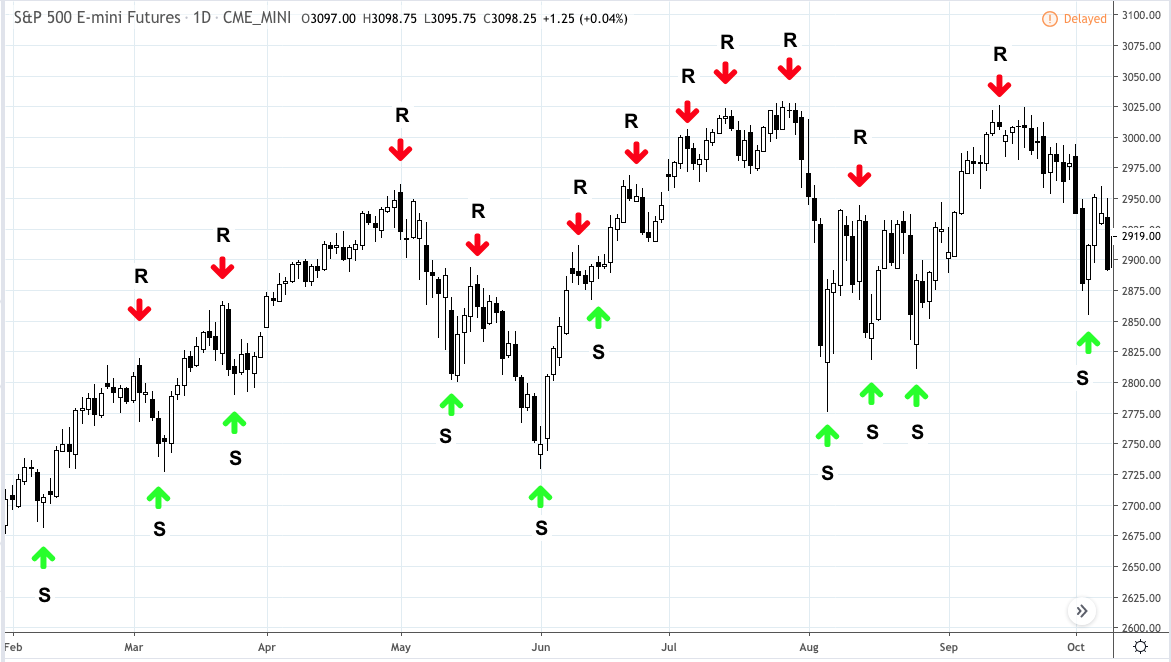 When a support or resistance level has been breached, price moving past the initial barrier, it is said that the old resistance level becomes the new support. On the reverse side, support that is breached may become the new resistance line.

When the markets begin to move side-ways within a range, this is typically taken to indicate that the market is evenly balanced between supply and demand. When the price moves outside of that tight-knit sideways movement, it will signal whether the bulls or bears have won. When such a breakout occurs on high volume, the outcome will likely result in a prominent move up or down–a new (and possibly strong) trend.

If you want confirmation or an additional source, you can access dynamic support and resistance levels through the Optimus News platform (free for customers). Optimus News’ Dynamic Support and Resistance Levels is able to automatically draw support and resistance for any instrument (levels prices based on spot prices and not futures prices). Levels are generated four times a day which allows our customers to have real-time, up-to-date analysis on price movements. Here is a quick overview in this video.

How to Trade Futures Using Support and Resistance Levels

The practical benefit of using support and resistance is that it can easily combine with other approaches, from strict price action to indicator-based systems. Support and resistance is a very straightforward concept as just about anybody can start drawing horizontal lines on their charts and see how price bounces off of these levels.

As with any indicator, support and resistance is not 100% reliable–but when they are not, the breaches provide critical market information that is equally actionable. Let’s dig a little deeper into some tactics concerning this matter.

The S&P 500 chart below illustrates the concept of support and resistance zones nicely. As you can see, there are 3 resistance zones stacked above each other. So which one is the right level to trade off? The answer is, all resistance levels are equally correct and the one you choose depends on your personal preferences and your psychology.

Aggressive – neutral – conservative
In the case of a resistance level, let’s assume that you are looking to sell when the price reaches one of three resistance levels. But which one would you choose? It all depends on the risk you are willing to take:

Aggressive
If you take the first resistance level, you run the risk of getting stopped out should price continue toward the higher resistance levels. This strategy is ideal for traders who not only want to enter sooner rather than later (out of fear of missing a trade) but can also withstand a lower win rate.

Conservative
This level is the farthest away, meaning that the price may not reach that level as often as the lower resistance zones. A conservative approach is ideal for the risk-averse trader who would prefer a higher win-rate, but at the expense of missing (more aggressive) trades.

Neutral
The neutral level where most traders tend to feel comfortable. It is a good compromise between an aggressive strategy where you will experience frequent losses and a conservative approach where you will often miss trade entries.

Pro Tip: Even if you only see 2 clear support or resistance levels on your charts, you can draw an additional line in the middle and create the ‘neutral’ zone.

If you feel that picking only one level alone does not sound like a good enough strategy, there is another possibility how you can use the concept of support and resistance zones. If we go back to our previous example, you can use the three levels to split your order among the different areas. Again, there are many ways to go about it, none of which can be considered ‘right or wrong’.

For example, if you want to risk 3% on the trade in total, you could enter three different positions, using 1% on each entry. Note that there are multiple ways to structure your position size using the concept of support and resistance zones. Our suggestion is merely one way to do it.

Support and resistance may look simple, but when it comes to making actual trading decisions, most traders would agree that it’s not as easy. The next 6 tips in this article can help take your support and resistance trading to the next level while avoiding common mistakes.

In the end, there is no right or wrong way to do this, you only have to make sure that you are following a consistent approach.

Is past price action more or less important than recent price behavior? This is a question most traders have and it’s important to understand the implications correctly. You may see situations in which strong support and resistance areas have worked perfectly in the past, only to be violated in later periods.

For that reason alone, it’s important to keep updating your support and resistance levels. We recommend going over all your levels at least once per week (more often if you are a day trader) and check whether the markets are still paying attention to the levels on your charts.

The price goes from respecting a level, to neglecting it, back to respecting it.

3. One Vs. Multiple Touches

Conventional trading wisdom will tell you that the more touches you have on a price level, the stronger it may be. However, conventional wisdom is seldom right, and when it comes to making general assumptions, listening to such suggestions can lead to bad trading results.

A good rule of thumb is that the more obvious something appears on your charts, the harder it usually is to profit from it.

The third point is usually faked when it becomes too obvious.

This is something that’s often overlooked in conventional technical analysis. Support and resistance rarely come in the form of single lines. This notion of single support lines has contributed to many poor trading results among various other problems. It’s simply a bad yet common fallacy.

More often than not, you’ll find support and resistance to occupy wider “zones” rather than single lines. Whereas traders who trade off of single lines can be taken out by volatility spikes easily, or miss moves when price does not reach their level, traders who follow wider price zones avoid many of those common problems.

Pro Tip: Draw multiple lines around a support and resistance area to capture the most price action. Then, avoid any price moves that happen inside the area as those signals are usually less reliant.

The advanced trader will wait for the price to reach his pre-marked levels before analyzing price action. The way price moves into the level, how it behaves there, and the general market context–all of these are important clues that need to be taken into consideration when trading support and resistance. Making predictions with pending orders may not be the most optimal approach..

6. Stops Around Support and Resistance

Placing stop losses right at support and resistance is another problem many traders have. Traders believe that the more obvious the level, the better it is – that’s what trading books teach you right?! However, when the majority of traders look at the same level with the same trade idea, it becomes very easy for the advanced traders to use this knowledge to their advantage.

This flawed assumption is often the very reason why you see volatility spikes and fake breakouts around major support and resistance levels–the professionals move price in a way so that they trick amateurs into taking unprofitable trades.

Instead, wait for the dust to settle and only trade when the price has established a clear sense of direction.

There is a substantial risk of loss in futures trading. Past performance is not indicative of future results.  The placement of contingent orders by you, your broker, or trading advisor, such as a “stop-loss” or “stop-limit” orders will not necessarily limit your losses to the intended amounts, since market conditions may make it impossible to execute such orders.

Related posts that may interest you: