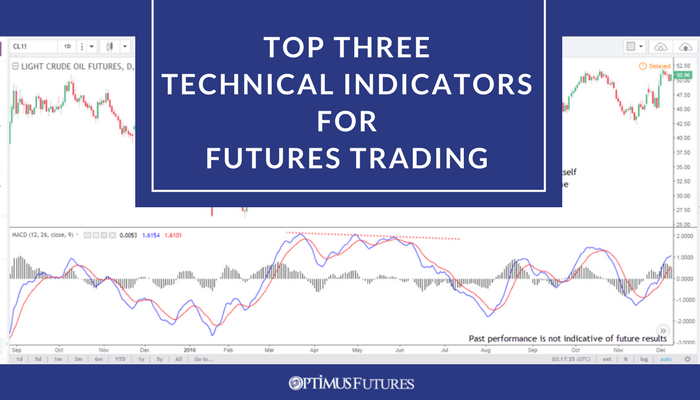 The following article on Top Three Technical Indicators for Futures Trading is the opinion of Optimus Futures.

As a futures trader, it can be quiet overwhelming to find the right technical indicator with all the options available in the marketplace. After all, no one likes a chart overlaid with too many indicators yielding conflicting and confusing signals, making trading stressful and daunting.

In this article, we look at three of the top technical indicators that may potentially assist you in selecting higher probability trades and managing them effectively.

Technical traders have been using moving averages to trade for almost as long as digital trading has existed. That is one reason why moving averages work so well in the first place. The more traders that follow a particular technical indicator, the higher the chances that indicator is useful for your own personal trading.

While using either of the two (shorter period versus longer period) classes of moving averages is acceptable with each having its own merit, some traders like to use a combination of short and long term moving averages, most often as part of “moving average crossover” trading systems.

While shorter term moving averages usually work well in strong trending markets (consider the last part of market action in the chart above) as you find several occasions when price bounces off them as support or resistance, in sideways market conditions they can yield far too many touches often resulting in conflicting and weak signals.

Whether you choose to use longer term moving averages, shorter term moving averages or a combination of the two, usually their functions will be the same. That is, we look at them on the chart as moving support and resistance levels, and in the case of crossover – possibly a sign of trend change.

If we sparked an interest within you to further explore the relationship between longer term and shorter term moving averages, perhaps you need to look no further than the MACD indicator or Moving average convergence divergence indicator.

The MACD is one of the most effective momentum oscillators that uses the difference between two moving averages (by default the 26 and the 12 period moving average) giving you the best of trend following and momentum information.

The MACD oscillates above and below a zero line often referred to as the center line, depending on whether the two moving averages are converging, diverging or crossing each other (which would yield a MACD reading of zero).

You will notice that as the red and blue lines cross each other the histogram is essentially flat, while it rises as the distance between the two lines widens.

As you may see in the chart above, the two lines on the MACD crossing can often pick up market turnarounds accurately and timely. However you will also note that a blind entry on every crossover wouldn’t help much either. It is always better to combine signals from different sources and indicators to further validate trade setups. Like all others, the MACD is also an additional technical indicator – and a very effective one – to validate your trades. It is by no means intended to be used as a standalone trading method.

It is also worthwhile to note at this point, that a lot of traders also prefer to use the MACD not to extract trading signals from, but to merely spot conventional divergence.

The above chart shows bearish divergence that is the highs printed by price are matched with lower highs printed on the MACD lines.

Note however that since the MACD is not bounded above or below the zero line it is not as effective in spotting overbought or oversold conditions outright. The Relative Strength Index (RSI) or the Stochastic indicator might be more useful for that purpose.

The third top indicator on our list is the Fibonacci retracement, which pans out different levels on a trend that price may potentially bounce off during a pullback.

Technically, Fibonacci retracements can only be used when price is retracing or pulling back into an established trend which in a way limits the use of this particular indicator. Well, there are Fibonacci extensions that you can use to plot areas beyond current price levels to predict where price may potentially hold as support and resistance while extending and building on the current trend. However, that variation of Fibonacci is not as widely used as Fibonacci retracement, which is why we chose to focus mainly on the Fibonacci retracement indicator for periods where price is pulling back into trends. After all, getting in on a pullback to a decent trend is one of the major goals of most traders.

Fibonacci retracement indicator essentially divides the distance between two extreme points (usually the swing high and the swing low of the trend) into the Fibonacci ratios of 23.6%, 38.2%, 50%, 61.8% and 100%.

While price may potentially bounce off any of the above mentioned levels the “golden Fibonacci ratio” of 61.8% and the 50% retracement level (which marks a pullback exactly halfway into the trend) are usually the most followed ones among the trading community.

While we emphasize that Fibonacci retracement levels be used in conjunction with other aspects of technical analysis, this also holds true with the other two indicators we discussed above as well as any other indicator that you may choose to employ in your trading.

While these technical indicators are highly popular and effective in assisting you understand price action and market momentum, they are in no way standalone trade entry triggers or even trade management tools for that matter. But when combined with other factors and varying angles of technical analysis, they can be mighty effective without overlaying too much on your chart and obscuring the good old “naked” view of price action itself.