This article on How to Become a Professional Futures Trader is the opinion of Optimus Futures. 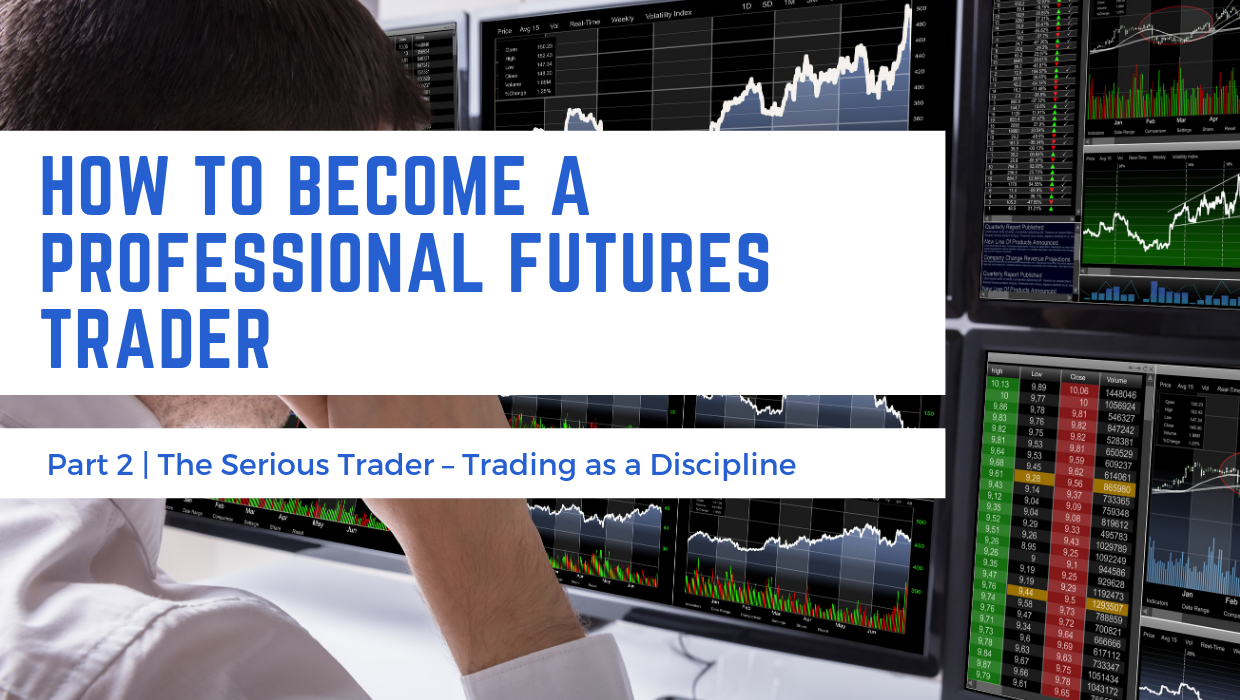 From Dabbler to Independent Pro (a recap)

In the previous installment of How to Become a Professional Futures Trader, we covered the three developmental stages of a typical trader: the dabbler, the serious trader, and the independent professional.

We discussed how the “dabbling” stage in trading futures can actually be a very important step toward discovering not only the markets but also your own approach to understanding and trading the markets. In this stage, “discovery” is what’s important.

This may seem obvious, but if you dig a little deeper, discovery can take on a passive or active mode: in other words, there’s a difference between passively accumulating knowledge and actively developing your own knowledge, discovery through absorption versus discovery through inquiry, static repeating versus dynamic learning.

Markets are dynamic. And in order to adapt to the markets, perhaps you should be too.

For a dabbler to rise to a more sophisticated level of trading, let’s assume that he or she must make the right choices at a number of key junctures during this early stage. And if a trader were able to take advantage of certain key learning opportunities during this phase, and if he or she maintains the same level of commitment to trading, then perhaps the trader, no longer a mere dabbler, can now be considered a “serious trader.”

The Serious Trader – Trading as a Discipline

Money Management as Both Defensive and Aggressive Strategy

When first learning how to trade, we associate the term “money management” with capital preservation, a defensive strategy. Indeed, preserving your capital plays a crucial role not just because it can help prevent you from losing large sums of money but because managing losses might be much easier than pursuing and nailing a win.

After all, the first rule of making money, is not to lose money. Warren Buffett has emphasized this maxim on more than a few occasions. It’s like a negative opportunity cost–money not lost is money gained–as money saved represents the potential for future money to be made.

Now imagine 2 traders both with around $20,000 in trading capital.

Trader 2–taking an aggressive money management approach–risks 2% per trade (of $20k initially, adjusting down after losses)

Stop Loss Disclaimer: The placement of contingent orders by you or broker, or trading advisor, such as a “stop-loss” or “stop-limit” order, will not necessarily limit your losses to the intended amounts, since market conditions may make it impossible to execute such orders

Distribution of P&L and Trading Expectancy

When presented with performance statistics, we are confronted with a reasonably extensive list of figures–some of the more basic ones including total return, win/lose ratio, profit factor, drawdowns, and much more.

Although each metric provides a unique angle from which to analyze performance, let’s cover a basic interpretation of metrics that many beginning traders(dabblers) tend to miss: distribution of P&L and a simple version of trading expectancy.

Distribution of Profits and Losses

Let’s say that you backtested several trading systems for a period of one year, and five of them produced an impressive 12-month return of 35%,

Take a look at that December gain of 105%. Now look at all of the drawdowns preceding it. Is this “profitable” system just lucky to achieve a 35% return, or is it built into the system? Would you trade a system with this kind of PL distribution? This you’ll have to determine on your own. But this might not be the kind of distribution you imagined when you initially saw a 35% return figure, imagining instead a smooth upward equity curve.

In this system all of the gain happened in January and February. After those months, the system slowly bled away its profits, dwindling it down to a return of 35%. Did this system or method reach a point of incompatibility (i.e. system death) with the markets? Hmmm.

Doesn’t this system (or method) come off as being a bit random? Large losses and large gains following one another in an alternating cycle. Is there enough rhyme and reason to follow it? It turned out to be hypothetically profitable. But is that enough of a reason to have confidence in it?

System 4 – Losses in parenthesis() are unrealized

A string of relatively small losing trades with only a few big winners. Although exaggerated, this example can resemble many trend following systems that accumulate many small losses due to whipsaws or drawdowns only to be recouped by much larger winning trades. Like the previous systems, this too achieved a 35% return, but would you be able to stomach the experience of this style of trading? Perhaps it’s the right approach for you; or perhaps not…it depends on your risk tolerance…and whether you have enough risk capital to withstand the drawdowns.

And finally, a steady move upward with relatively small drawdowns. When we see a system or method present a 35% annual return figure, this is probably what we imagine the distribution of profits and losses to look like. But unless you dig deeper and actually look at the distribution, you may end up trading something that resembles the first three examples (systems 1 -3).

Here’s are a few tricky questions:

We use a trading expectancy calculation:

If you plan on trading seriously, you might want to know this basic calculation. It’s not the “be all, end all” of trading projections (far from it), but it certainly beats remaining in the fog with regard to performance metrics.

A Stronger Understanding of the Fundamental Environment

I’m not going to spend much time on this topic, but many new traders start off as strictly “technical” traders. Technicals tend to be tactical in nature; they provide a clear sense of the market environment from a tactical perspective. But trading tactically without a larger strategy can be dangerous.

Although it is a popular notion that fundamentals are evident in the technical patterns exhibited by market prices, it doesn’t follow that technical prices can help you project “fundamental” trends in the market that haven’t quite actualized in price.

Hence, only dabblers rely solely on fundamentals. Serious traders keep an open eye, and open mind, toward what really drives the markets.

Profitability in the Live Market

Ultimately, what differentiates a serious trader from a dabbler is not only that the former actually trades the live market (simulations don’t count…so don’t fool yourself), but that he or she can pull a relatively acceptable profit from the market.

After all, making money is what trading is all about. And as long as the serious trade can remain on this path while adapting to changes in the market, learning new ways to trade better, and unlearning any methods or habits that get in the way of live profits, then perhaps that trader might eventually develop enough experience and capital to reach the stage that every trader wants to achieve: going pro.

We’ll cover this last stage in the next installment. So stay tuned.