This article on WallStreetBets is the opinion of Optimus Futures. 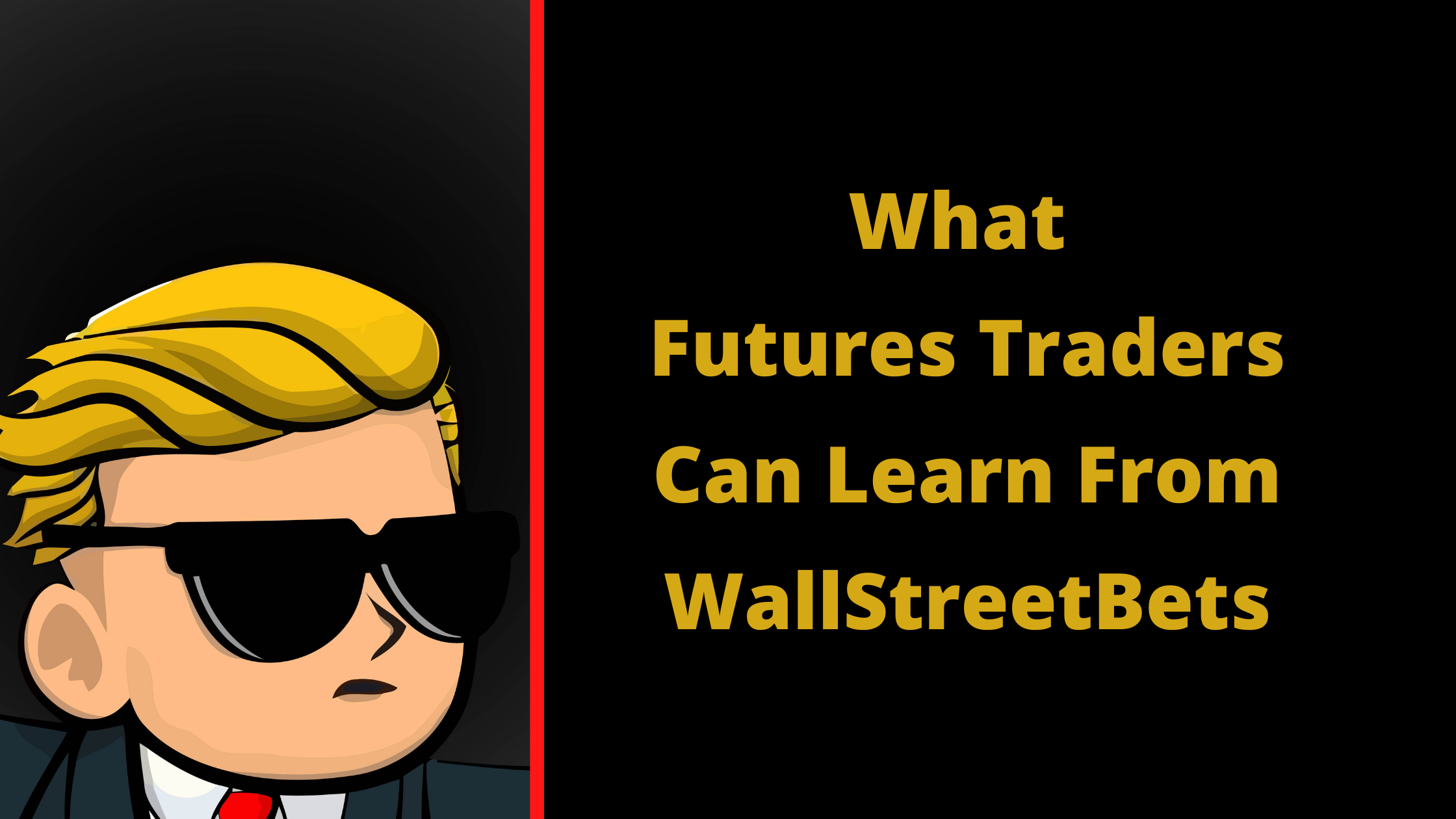 In early January 2021, there was this sleepy stock that most analysts considered a real “loser” of an investment. Not only was it a brick-and-mortar shop that occupied American malls amid a pandemic, but its revenue was being disrupted by streaming services and online sales. Nevertheless, it exploded by 2,319% in just 12 days. And just 10 days later, it plunged by 847%. 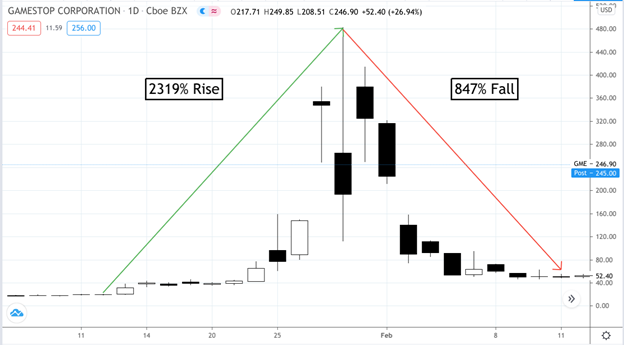 This was the infamous GameStop (GME) short-squeeze, courtesy of the sub-Reddit forum WallStreetBets. It showed the “elites” on Wall Street that Main Street if angered and united, can inflict severe damage on the very institutions that (they felt) had somehow crossed them.

That’s the narrative, but is it true? Can social trading mobs facilitated by social media tech pose a formidable threat in the markets? Can such “swarms” hit the futures market as well? And whatever the case may be, what futures traders learn from the WallStreetBets phenomenon going forward?

The GME Short-Squeeze – What Happened?

Can a large amorphous group of traders swarm an asset with such timing, conviction, and, most importantly, capital to cause short-bent hedge funds to cry uncle and walk the plank above the sea of insolvency? The WallStreetBets sure made themselves heard, and the mainstream media was happy to give them the credit.

There were reports, however, that companies monitoring “market surveillance” software saw a different story. They saw a retail trading mob driving the price of GME up, say, 30%, fueled by news of their impact and tweet by Elon Musk. But as GME was gaining more traction, however fractional that might have been, some undisclosed big players with frighteningly tremendous amounts of capital came in and drove the stock up toward its ultimate 2319% high, before reversing their positions with a vengeance, causing losses to those caught on the long side.

According to people monitoring the software, this was not the work of retail traders. This might have been the work of the very hedge fund institutions that WallStreetBets was trying to disrupt. Whether this is true or not remains to be disclosed, if ever. But to hedge on the safe side, maybe we should assume that while following the crowd may not always be the best thing to do, monitoring the crowd chatter might be wise if you hold sizable positions on any asset.

But there are other contending theories that play a big role in the market. First, if you followed the Weekly Commitment of Traders (COT) Report in the weeks leading up to February 1, you would have noticed that the majority of the short positions were held by four parties. These are likely banks or funds (identities are not disclosed) holding the short.

But let’s think about this for a moment. Why would a fund hold a short position against silver? Well, probably some of those funds happen to be the custodian of physical silver-backed ETFs. It is a “hedge”, in other words. That is what some silver experts claim.

They are also claiming that the ETF space is a mere drop in the bucket when compared to the entire physical silver market. In other words, a short-squeeze would barely make a difference in the price of silver.

There’s also the flip side to that argument. Some experts claim that the number of short positions in the futures market exceeds all of the unallocated physical silver in the world. And given the silver shortage–short-term due to Covid and longer-term due to a slack in production given the silver downtrend–these funds might truly have been “short” silver, meaning that a buyback to cover short could have shot the white metal through the roof (so goes the contending theory).

According to Ted Butler of SilverSeek, there are more short silver positions than in any commodity trading in the exchanges. So, what are we to say about that? Despite this alleged “price suppression,’ you have to ask yourself whether monetary and industrial demand might support the silver uptrend. That would be the “rational” way to approach any market.

As you know, however, most traders or investors don’t always approach markets rationally–and that leads to our next topic.

We have all heard the saying that “the market can remain irrational longer than you can remain solvent.” That one comes from economist John Maynard Keynes. Similarly, Warren Buffett says to be “fearful when others are greedy, and greedy when others are fearful.” And Sir John Templeton says that “Bull markets are born on pessimism, grow on skepticism, mature on optimism and die on euphoria.”

All three are predicated on the notion that markets often do not act rationally during the extreme ends of a cycle. The problem is that one can never predict when a bullish or bearish cycle will end.

Remember that markets reflect both the sentiment and expectations that fundamentals will eventually validate a given valuation. If the markets bid a futures commodity up 25%, then the fundamentals of supply and demand are expected to show that the price is right.

This is how supply and demand conditions end up being “priced into” the markets. Of course, market sentiment and expectations can be wrong, as no person can accurately predict or time the markets consistently.

Often, successful traders know how to “react” to mistaken expectations, as they may have already prepared alternative scenarios and responses to the anticipated condition.

So, might it be the smart thing to just “follow the trend” up or down? That’s one way to approach markets. It’s also a lot harder to do than it sounds, so let’s talk about that next.

The Pros and Cons of Trend Trading – Don’t Jump in Unprepared!

Price fluctuations can be wide and, depending on how you measure or distinguish an uptrend from a downtrend, you may be subject to multiple “whipsaws.” 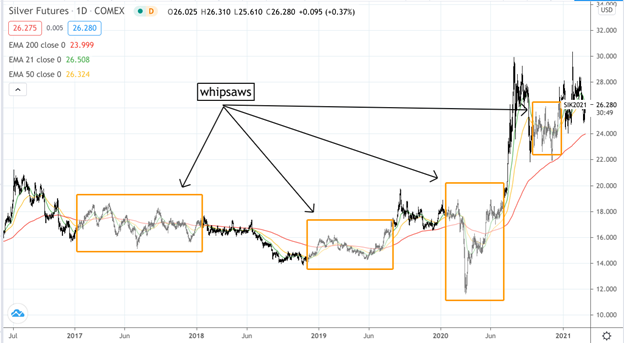 It’s easy to say, “follow the trend.” But trend in reference to which zero-point? Also, are you talking about a “technically-based” trend, or a fundamentally-based trend? There are many trends within a trend, and if you’re going short and long depending on the trend, you may be in for a lot of small (or large) losses.

The question is, can you stomach the drawdowns? Do you even have enough capital for the drawdowns? Perhaps trend-following is for you. Just don’t jump in unprepared, or you might be in for a very unpleasant surprise, whether your system is profitable or not.

Trading Vs Investing | Know What You Are Trying To Do

When you hear the term “trader,” what often comes to mind is someone who shoots for shorter-term price returns. In contrast, an “investor” is taking a much longer position, hoping that his or her assets will appreciate over time.

And this brings us to the last section–one that might seem much less confusing than it really is. Should I follow a social trading feed or not?

A New Market Force – The Power of the Retail Crowd

The January “swarm” of WallStreetBets traders decided to raid certain stocks with the aim of causing hedge funds billions in losses. Stocks like Gamestop, AMC, and silver-backed ETFs like iShares Silver Trust (SLV), to name a few. What motivated the crowd?

It is a mixed bag. It’s hard to imagine that some of the Redditors actually believed that certain stocks, like GME, were “undervalued,” though one can argue that perhaps silver might be. Many other novice traders jumped in motivated by FOMO—or the Fear of Missing Out.

But judging from the discussion on the WallStreetBets forum, the sole motivation for many had little to do with making money based on sound bets but rather on taking money back from hedge funds or any institution they felt represented the amorphous “elite.”

CNN compared this movement to the kind of “Trumpism” we saw on January 6. NPR saw this movement as a way to “hit back at Wall Street after the Global Financial Crisis.” Interpretations may vary but reports center around common themes of anger toward a notion of “elitism,” and that somehow the markets are “rigged.”

When a social media forum turns into a virtual staging ground for a movement, when a tool for shared insight becomes a tool to advocate ideological thoughts and actions, or when a gathering of the like-minded transforms into a concentrated mass of mob mentality, then perhaps it’s time to step back and think independently, as many unexpected things—good or bad—can take place with a great deal of volatility.

For experienced traders, social trading helps inform them of certain stocks or assets that they may not be following. For both experienced and newer investors, it allows them to follow the opinions and market actions of experts or popular personalities in the field. It also lets people see whether there’s a majority opinion in a given market, and what direction—bullish or bearish—guides crowd bias.

The big risk is that your favorite feed or your favorite crowd ends up dead wrong and you end up losing money if not blowing up your account. There’s also a dark side to social trading that culminated in an explosive and unprecedented series of events this year, like the January 6 Capitol Hill Raid.

We’ve seen how social media “forums” can easily turn into politically or ideologically-motivated “movements” that have specific rallying points, objectives, or even targets.

When investing, there is nothing wrong with seeing what the crowd is doing. It might even help inform you of market opportunities that you can’t see, simply because it’s impossible to be aware of everything. But if crowd insight is important, it’s equally important to see what the crowd doesn’t or can’t see—and that can mark the difference between a successful or a failed trade.