The following report is the Opinion of Optimus Futures, LLC.

Immanuel Makron won the French election as expected, but there were two important facts that traders should note: The first is that more than four million voters made an effort to go to polling stations only to cast a white ballot, meaning a record number of French voters cast their ballots for nobody . The second is that some 11 million Frenchmen voted for far-right candidate Marin Le Pen. Her party certainly expected higher numbers, but it is still an amazing number of votes by any standard. This is because it is no longer the leader of a marginal party or a handful of extreme far-right eccentrics.

The S&P EMini 500 posted an inverted pinbar (a rejection pattern) last week and traded below the resistance at 2280 and the support at 2260 with a strong rejection of a mid-week sell-off attempt. Good US data and boosted retail sales numbers helped the S&P maintain the highs. Mid-week, traders were disappointed with Trump’s speech for not addressing his spending and stimulus plans. The following analysis is the Opinion of Optimus Futures, LLC.

Technically, the S&P 500 EMini is trapped in a narrow range and waiting for a catalyst. Markets are closed on Monday in the US but it will be a busy week afterwards with lots of news items on the calendar. Trump’s inauguration is next week on Thursday and traders will listen closely to what he has to say.

The 30-year US Treasury closed slightly higher and yields were lower. Remember, price and yields move inversely. The uncertainty about Trump’s policies and the high valuations are still weighing on Treasury yields.

The positive retail sales data acted as a short term catalyst and helped it climb higher. Similarly to the S&P 500 Emini, Treasuries traded in a narrow range last week. Next week, with Trumps inauguration, markets should see more volatility. CPI data on Wednesday and multiple FED and FOMC appearances during the week are usually also big movers for Treasuries.

The US Dollar  sold off for the 3rd week in a row and weaker Chinese trade data added to the Greenback’s bearishness. As mentioned before, Trump did not address his stimulus program during last week’s speech which the markets took as bearish for the US Dollar. Analysts still see the US Dollar higher for the year but a lower likelihood of immediate interest rate hikes weighted on the US Dollar.

The Dollar is approaching the psychologically important 100 support level. Last time we saw a strong overreaction followed by a rejection. This week’s CPI data along with Yellen’s appearances will probably add a lot of volatility to the Dollar.

Gold moves with a high negative correlation to the US-Dollar and Gold posted its 3rd week of consecutive gains as uncertainty rises again. Price found resistance at the 1200 level last week but the weekly price action confirms a high level of bullish momentum.

Clearly, Gold is driven by intermarket correlations between the equity indexes and the US Dollar. Thus, Gold traders have to keep an eye on those markets going into the next week. From a technical view, there are the 1240 and the 1200 resistance above current price and 1180 is the next short term support below price action.

Crude oil closed significantly lower on the week but recovered some of the early week’s losses. Crude oil traders are awaiting proof that producers are following through on the production cuts. From a price perspective, there are still some doubts how the OPEC deal is being carried out. Analysts put a lot of weight on the monthly production data which will clearly show how production has developed since the OPEC deal.

Crude oil, like many other asset classes the week, is trading in a narrow range between the resistance at $55/56 and support at $50. Without a catalyst, it’s likely to see price continue its range bound price action. If more doubts about the OPEC deal arise, we could even see a further drop below $50.

There is a substantial risk of loss in

The S&P is trading at 17 times expected earnings, significantly higher than the 10 year average of 14. Last week, there were 24 new 52 week highs and no new lows. The Dow Jones only came a few points short of the historic 20,000 price level, and the E-Mini pushed back above 2270, closing at the highest level ever observed. Although last week’s US job data was mixed, average hourly wages showed a steady rise, indicating that the US economy is on the right track. The positive development will reassure the FED that their decision to raise rates in December was the right one and it will give confidence for more rate hikes in 2017. The analysis below is the opinion of Optimus Futures.

Despite the selloff two weeks ago, the S&P E-mini is back on track and the bullish close last week at an all-time high confirms that

The S&P posted a 9.5% gain in 2016 even though the last week of the year ended with a strong sell-off. Many investors see warning signs for 2017, including high stocks valuations, overly enthusiastic bullish sentiment, doubts over Donald Trump’s ability to follow through on his election promises and the FED’s plan to raise interest rates multiple times in 2017. At the same time, many investors postponed selling their gains in 2016, anticipating lower taxation in 2017 under the Trump presidency. This last effect could lead to short-term selling. The following analysis is the opinion of Optimus Futures, LLC.

We pointed out the market top pattern of the S&P E-Mini 2 weeks ago and last week saw the confirmation with large selling after multiple rejection and indecision candlesticks. The price dipped below its 21 EMA on the daily chart and closed weak last Friday. The next support is at 2200, and since stocks

Stocks were hovering sideways for the second week in a row with the S&P Emini around 255 last week. More analyst reports came out warning of a turnaround as investors focused on the adverse effects of Trump’s policies. A stronger US Dollar could hurt corporate earnings and overall GDP in 2017, while a stricter trade policy may hurt manufacturing and factory employment. The analysis below is the Opinion of Optimus Futures LLC.

A look at the daily chart on the S&P Emini shows a narrow wedge forming at the current 2260, a price area which is a consolidation formation. A break below the range could lead to a stronger correction, but volatility has decreased in the past two weeks as we head into the end of the year with the markets waiting for the next catalyst. 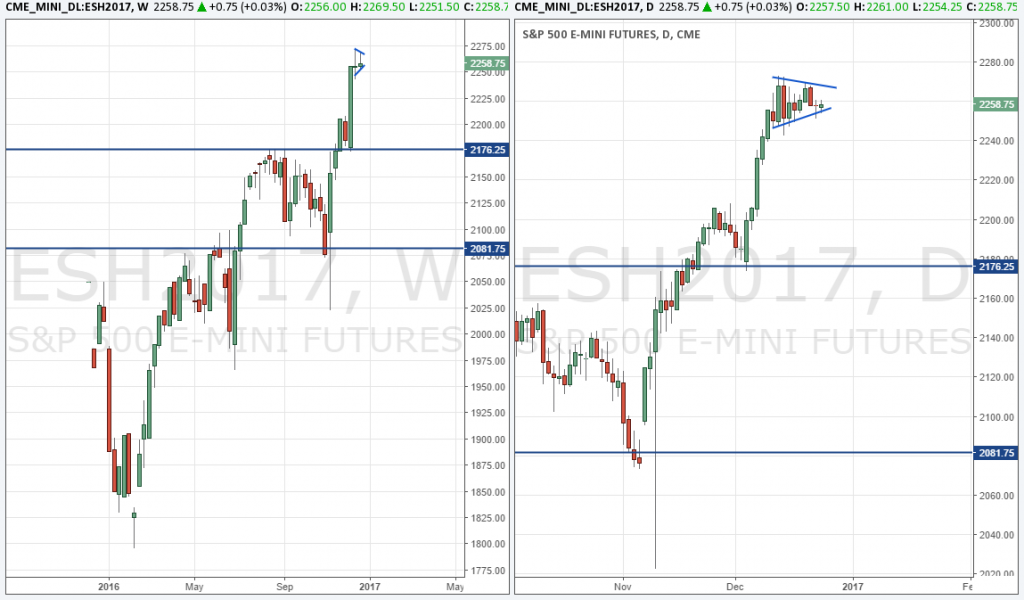