This article on futures trading and gambling is the opinion of Optimus Futures. 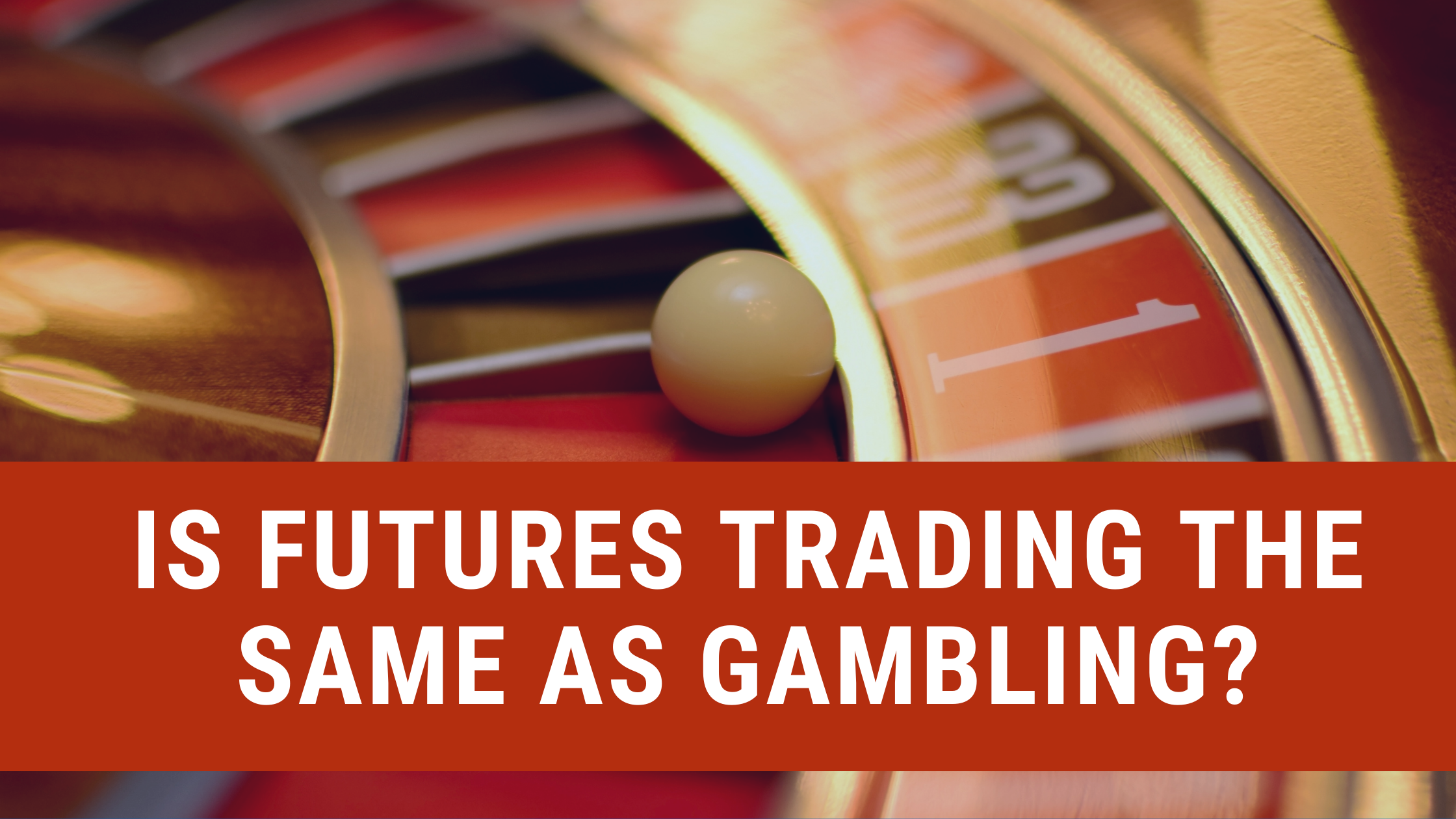 “You can lose everything trading futures!” That is what we’ve been told. Another thing we have probably heard from skeptics: “If you’re going to lose your money, then why do it on futures when you can actually enjoy losing money slower at a casino?”. So, there you have it: the common conception that retail futures trading is tantamount to gambling. Fast money made, fast money lost.

But is it entirely true? What are the similarities and differences between a skilled gambler and a skilled futures trader? Is a long or short position in the S&P 500 futures the same as a black or red position on the roulette table?

Let’s imagine three hypothetical traders named Jim, Jeff, and Julia. All three traders were looking to make a profit off the S&P 500 as market sentiment seemed to be running hot toward the upside.

Jim had a gut feeling that the S&P 500 futures (ES) might move up following the previous day’s pullback. He took a small position on a hunch after reading the news. He speculated the Federal Reserve’s near-zero interest rates would continue to buoy companies and, by extension, their share prices. After all, the S&P 500 is diversified across multiple sectors, more or less evenly unlike the Nasdaq index futures, (NQ) which is tech-sector heavy.

Jeff used indicators, order flow software, and other technical price action setups to get in on his trade. He came to the same conclusion as Jim–that the S&P 500 had plenty of upside to go. So, he opened up a huge position three times Jim’s size.

Julia did the same as Jeff–he constructed his setup using indicators, analytics software, and he went as far as consulting analyst forecasts. He, too, saw plenty of upside for the S&P 500. But his position size was small, equal to Jim’s.

The S&P 500 advanced by 20 points that day, but only two came out winners.

So, who was gambling and who was trading? The answer is that Julia was the only trader while the other two were gambling. How so?

Jim was trading off his gut with no real tactical or strategic setup. He didn’t have a clear picture of the odds. Instead, he was just lucky that the market went his way. That’s gambling.

Jeff took a very strategic trading approach like a responsible trader. However, his money management strategy via position sizing (if he even had one) got the best of his setup and took him out of the market. That’s a gambling move, not a calculated risk.

Julia calculated her odds and took her best shot knowing well that the market might move against her. Fortunately, it didn’t trigger her stop loss and so she benefited from the entire market move.

A gamble is a decision that leaves more to chance than to pre-calculated moves. A trade, on the other hand, is a calculated risk taken with the best probabilities in mind.

The Lesson: You can have the same trade and same outcome while approaching it from two different perspectives–that of a trader and a gambler.

Disclaimer: The placement of contingent orders by you or broker, or trading advisor, such as a “stop-loss” or “stop-limit” order, will not necessarily limit your losses to the intended amounts, since market conditions may make it impossible to execute such orders

We’ve heard that Wall Street is the world’s biggest casino. You can include the Chicago commodities exchanges along with that. But are trading institutions prone to gambling in the same way that retail traders often unwittingly are?

Oversized Risks Among Retail and Institutional Speculators Versus Hedgers

The more you understand and gain experience in trading, the less of a gambler you become. Remember, a gamble leaves a greater portion of the outcome to the unknown.

There are several ways to gamble without even knowing that you’re gambling:

These erroneous factors and their many variants are NOT the sole domain of the retail investor, they also happen among larger institutional funds as well.

That’s how institutional funds blow up–by underestimating risks that could have been avoided had they taken such foreseeable risks more seriously.

Another example: many well-intentioned financial advisors might give you the best possible investment advice based on common dollar-denominated instruments. This happened in the 1970s. Many weren’t paying attention to the inflationary surge. At that point, sticking to financial instruments that derived their ultimate value from US dollars was a huge gamble, no matter how knowledgeable, calculated, or well-intentioned the advisors may have been.

It’s a complicated matter because you can’t hedge the risks that you aren’t aware exists. And there are always risks of which you aren’t aware.  So, in a way, there is a bit of gambling in any calculated risk.

The difference: gamblers knowingly enter a game that’s skewed in favor of the “house,” whereas traders try to skew the advantage of the “house” in their favor.

Institutional hedgers are a whole different lot of traders. They’re trying to eliminate risk and speculation by freezing the price of a given commodity. Whether a futures contract goes up or down, their aim is to keep the cost steady by betting against what they already own or need to own.

It doesn’t matter if, say, corn futures rise or fall. Whatever price they’ve locked down, they are either going to deliver it at that price or buy it at that price. Hedgers are anti-speculators. Their speculation is in the forecast of demand for production–as a commodity producer or consumer product manufacturer. They have very little to do with the retail or institutional fund speculator.

Futures Gambling at Its Finest

Perhaps the best way to learn to avoid gambling in the futures markets (a futures trading gambling hybrid) is to illustrate the mindset of a gambling trader.

You are gambling in the futures markets if…

Perhaps this covers most of it.

The Bottom Line: It’s All About Method, Management, and Constant Questioning

What separates a trader from a gambler is not necessarily knowledge, technology, or even experience. It is a mindset toward practical method–to construct or execute a practical method that, to the best of his or her ability, is sound. Not all methods are sound, but you have to know the ins and outs of it to know whether it’s unsound or just having a bad streak.

Constant questioning is what will help you avoid system death (when a system stops working for the long term due to changes in the market environment) or following a losing system (because you didn’t assess it correctly or it misrepresented its performance metrics). If you can’t doubt yourself or your system in a constructive way, then you’re fated to be fooled by just about anything in the markets, most importantly yourself.

As there’s a “trade” in every gamble (it’s a transaction), there’s always a little bit of a “gamble” in every trade. Some traders can be more “impulsive” than many gamblers (that’s the stereotype, at least) whereas some gamblers are more cunning and calculated than most traders.

But trading is NOT the same as gambling outright. The odds in trading can be theoretically stacked in your favor based on method and management. The rules of the game in a trade can be improved based on constant questioning and method alterations. Whereas, in most casino games (most but not all), the odds are stacked in favor of the house. The rules of the game cannot be changed. And therein lies the differences that distinguish the two.