This is the opinion of Optimus Futures. Please read the disclaimers below the article discussing the risks of futures trading and seasonal based trading. Enjoy! 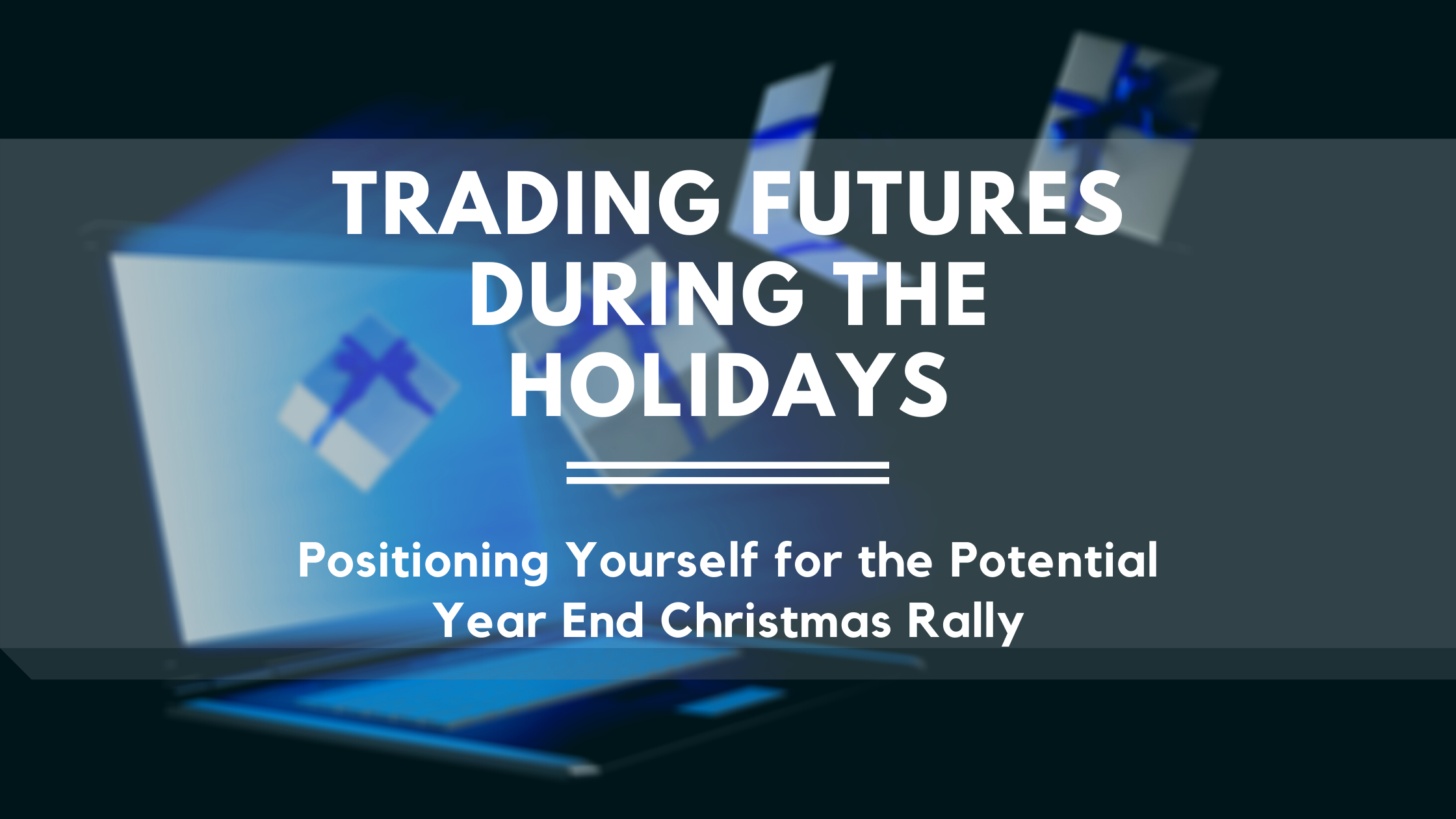 Past Performance Is Not Indicative of Future Results. Especially regarding Seasonal Events

You see this warning on every single financial trading or investing disclosure. But when it comes to seasonality — a phenomenon that seems to happen consistently “on average” (the key term is “average”) — this warning is not something you should underestimate.

A Surprise Wish For the Holidays…But Will It Be Granted?

Almost every Holiday season, investors expect to get a surprise under the proverbial tree. Sometimes they receive what may be equivalent to a lump of coal, but statistically, so far, they might get rewards in the form of a broader market rally. Hence, investors tend to position themselves for it. But the question is always–will it pan out this year?

Past performance is not indicative of future results.

Whether you believe in this seasonal phenomenon or not, history leaves evidence of the footsteps leading down the chimney. Take a look at the following charts: 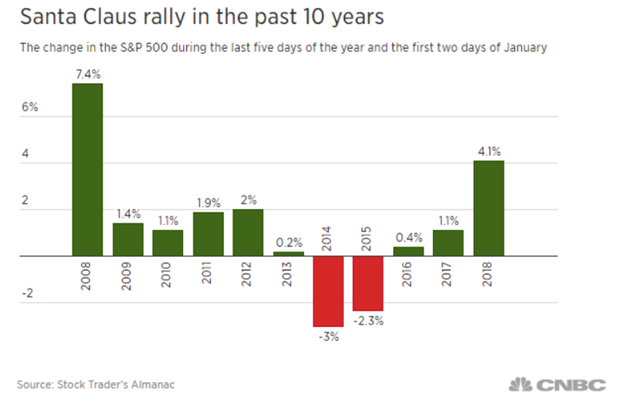 Not enough information for you? Try a 20-year chart, this one: 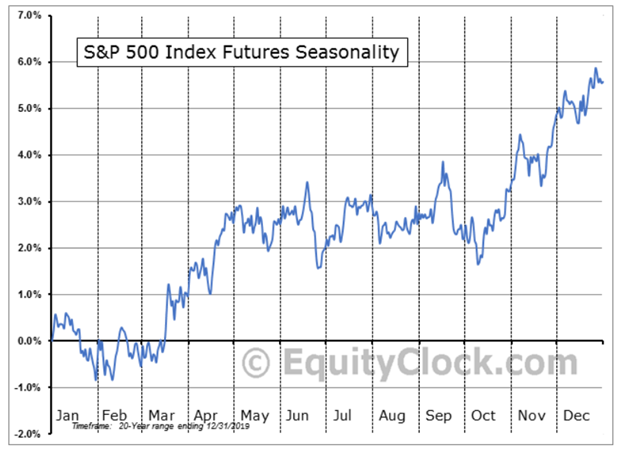 Will the Year End Rally Occur This Year?

Do you believe in the year-end “Santa Claus” rally?

What the charts above tell you is that the rally tends to visit each year. It’s not guaranteed, and bad economic weather can certainly get in the way of his sleigh. But as a speculator, you might want to consider that the trend may be strong enough not to anticipate, and certainly consistent enough not to be “bad” by betting against it; short-selling Santa’s sleigh ride, lest you risk getting trampled underfoot by his reindeer.

So, as a “seasonal trend,” we want to understand fundamentally what the reason for any consistency might be. Bottom line, you need to decide whether the same underlining condition may exist this year. Then position yourself for such a move understanding fully well that it may not happen in the exact format or at all.

1 – True Believers Have Their Way

This isn’t an economic factor but rather a matter of demand. In other words, so many investors believe in an end of year rally that they’re willing to risk their capital while rewarded in a form of stronger market performance. In other words, a major part of this rally might be that it’s a self-fulfilling prophecy. Note that this pattern was first identified (officially given its name) in 1942. If that’s the case, consider, as we suggested above, if the same condition applies this year.

2 – This is the Season for Harvesting Losses

Investors who are holding on to stocks that are under-performing may take advantage of tax-loss harvesting rules to “get back” what they had lost. If so, December is the month to do it, unless they’re willing to wait another full year. Strangely, this causes both stronger and weaker stocks to rally, as investors rebalance their portfolios across a wide universe of stocks, potentially creating upward momentum through various indexes.

3 – Traders are on Vacation

Consider the potential lack of liquidity when many traders are out of the market. Some firms that are long-only like some Mutual Funds, and they may find this environment less challenging to buy equities. This of course, does affect the stock indices because some of the stocks bought could have high multiples in the S&P and NASDAQ.

Traders and managers may purchase a whole new portfolio especially value stocks before the year-end. That might explain why some value stocks could outperform all other equity classes at the end of the year. Whatever the reasons may be, Sinterklaas may be strong enough a myth to exert a functional effect on market reality. So, the question now is, how might you trade it?

Since we’re dealing with stocks, it would be best to focus on stock index futures (rather than other non-equity derivatives). In short, we’re talking the Dow Jones Industrial Average (YM, MYM), the S&P 500 (ES, MES), Nasdaq (NQ, MNQ) or the Russell 2000 (RTY, M2K).

The potential end of year rally is popularly conceived as being a 7-day phenomenon only. Given the factors above that may be fueling the rally, it makes sense that the last month of the year, December, is when the rally starts. So how might you trade it? Well, there are two approaches.

The traditional approach would be to buy an index the last week of December and to close your position 2 days after the new year. The historical results are shown in the first chart above, returns shown below:

Small gains, sure, but pretty good for a 7-day trade. But the rally has a far greater scope, so let’s take a look.

Past performance is not necessarily indicative of future results. 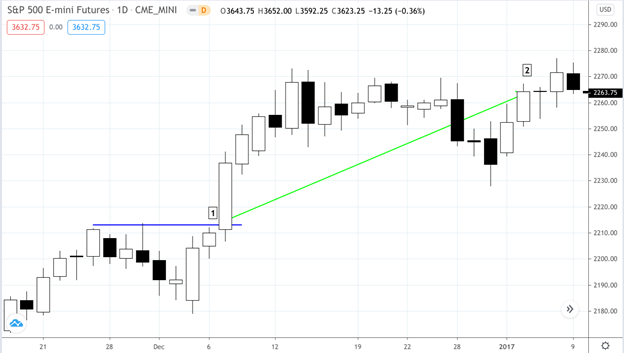 If the rise gets an early start, which is usually the case, then it makes sense to use basic price action principles to determine your entry point.

In the example above, the breakout of the previous swing high [1] in early December would have made a favorable entry point as it would any other trade. With a stop loss a few ticks below the previous swing low (which you can see on the chart), your exit at [2] might have yielded a strong profit; certainly more than the +0.4% return using the traditional approach that year. 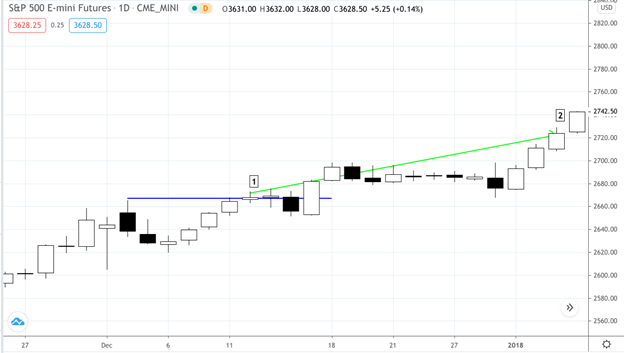 The following year would have given you a similar result, buying a breakout of the swing high at [1] and closing after the first two market days in January [2].

This presents us with an interesting case, as the market tumbled this year. On one hand, using the longer-term approach, you would have had no trade at [1] as the market never took out the swing high.

If you traded the traditional approach (buying the last week of December), it would have yielded a gain. But that also would’ve been quite frightening; buying during a plunge could be psychologically challenging. 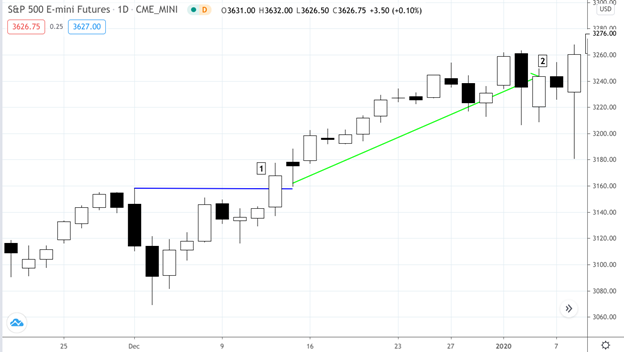 Here, again, taking the longer price action approach would have been favorable, entering at the breakout of the November swing high [1] and exiting after the first two days of January [2]. 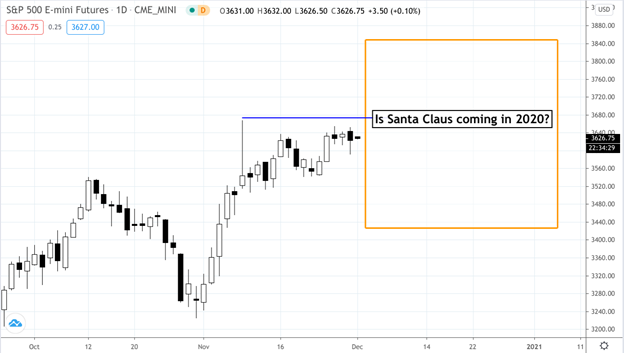 Well, we see the setup; the November swing high. Will the rally come, or is the COVID-19 economic environment may prevail later in the Month of December?

In the US, is Congress’ inability to bestow “goodwill” in the form of a second stimulus enough of a discouragement–that, perhaps, the markets might not deserve a reward in the form of investor confidence? Or are central bank actions–backstopping the markets and financial system–” goodwill” enough to encourage Santa Claus to bring a rally?

We’ll find out soon enough. Whatever the case may be, be sure to keep a reasonable stop at the most recent swing low. Stay safe and have a Happy Holidays!

This information presented here is general, and we do not recommend any specific strategy for such events.  Exercise your own discretion and risk when you trade.

Futures prices factor in the seasonal aspects of supply and demand.  This communication may cite historic data and should not be taken to mean certain trades can produce dramatic profits year in and year out.  This information does not imply customers have or will experience profits based on seasonal trades or trade data.

The placement of contingent orders by you or broker, or trading advisor, such as a “stop-loss” or “stop-limit” order, will not necessarily limit your losses to the intended amounts, since market conditions may make it impossible to execute such orders. Past performance of actual trades or strategies cited herein is not necessarily indicative of future performance.

Mention and links to non-Optimus Futures site do not constitute an endorsement by Optimus Futures or any of its employees. External links could be subject to change.